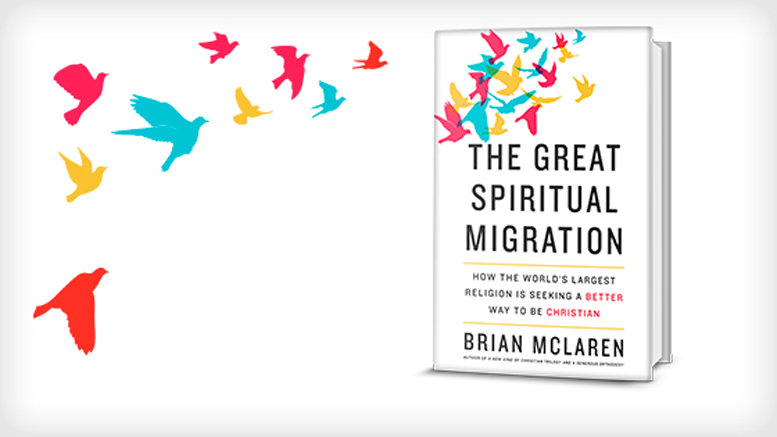 When you read the book title, maybe you thought the same thing I did, “Good luck!” I mean, Christianity is truly like the Titanic except that it has a few other giant sized ships cruising right next to it and even a few more trying to stay close to it but losing distance as they lose their way. For thousands of years of splitting hairs and in some case Greek letters, Christianity has divided, come together, divided in other ways, and yet again tried to find pathways forward in unified beliefs.

What am I talking about? Denominations.

As a disclaimer, I am not against denominations and varied beliefs systems. Why I bring it up is that it affects the way Christianity moves forward in a unified manner in this century. Fortunately, for decades now, we have seen denominational lines blur, churches spring up somewhere in between two (or three) denomination beliefs and praxis. Nevertheless, we have also seen other denominations hold their ground, holding tight to certain beliefs that define (or separate) them. Whether one sees the glass half empty or half full, there has yet to be a time such as this for large scale change.

For those who have followed McLaren’s prodigious writing career over the last two plus decades, as I have done, this book comes as no surprise. Perhaps, next to A Generous Orthodoxy, this will be named as one of McLaren’s standout works of his lifetime. I do not say that because of McLaren’s ability to make the change, but his uncanny ability to see changes take place and be on the front line of explaining them and providing ways forward for those who want to see Christianity form and shape subsequent generations.

Of course on the flipside, I cannot ignore the landslide of those against the writings and teachings of Brian McLaren and the short-lived Emergent Church movement. (The Emergent Church movement should not be confused with books and teachings on the emerging church topic as they are loosely connected but not the same idea.) He has been lumped in with others who only sought new and radical ways to do church, while he has truly added deeper dimensions of thought and praxis to those seeking to be a new kind of Christian.

I have put beliefs I found sound in McLaren’s books in practice over almost two decades of ministry and found them to be solid ways of living and being Christ in an ever changing, confusing, and chaotic new world. Others, I simply dismissed as all thinking people should do if they do not match up with their deepest held beliefs. Growing up in a rural community, I would hear, “Eat the fish, but spit out the bones.” Who knew how simple yet crucial that would be as I encountered new beliefs throughout my life? Country folk have sound wisdom.

The Great Spiritual Migration is divided into three large sections hitting the overall ideas of spiritual, theological, and missional migrations of Christian belief and praxis. Within those parts, he takes a closer look at the landscape of each, not only in America but especially in other countries, as many third world areas are creating theology and missional beliefs for all of Christianity, replacing America in sheer numbers of followers. America and Europe continue to have the most prestigious religious institutions, yet as when Christianity moved from the East to the West, it may be seeing yet another large scale migration that will literally change the way we live and believe as followers of Jesus.

Part I on The Spiritual Migration, I found as typical discussion of moving from only holding a belief to allowing that belief to be expressed and challenged by living out a more robust love for all of mankind. His other books elude to this either in teaching or in narrative as he has taught these ideas since the beginning, along with many other emergent and emerging leaders. I do not feel the need to spend time here.

Part II on The Theological Migration is a bit more unique in teaching but still addressing the greatest challenge and question Christians face from opposition – the Old Testament God of genocide and the New Testament Jesus of love. If God and Jesus are one and the same and God/Jesus is love, how do we reconcile the genocide found all throughout the Old Testament? Here McLaren describes how we meet God and then over our life we develop upgrade on our knowledge much like a computer upgrades as it gets smarter. Here he believes that an answer can be held in God 5.0.

With God 5.0, we learn to see that Christian history, teachings, and violence have been done in ignorant at best or totally abusing uses of Scripture throughout history. Supremacy has been done to many who are deemed lesser in the name of God. But is there a better way? Of course! We must all repent of our history and migrate to a move loving and deeper embedded belief in Jesus of Philippians 2. In summary, God 5.0 as seen in Jesus of Philippians 2 is a God who moves us away from the Christian love affair with war and violence to humility, peace, unity, and social change.

Also of note in this section, McLaren joins the voices of those seeking to interpret the Bible in more meaningful ways. Do we always interpret literal? Do we allow only liberal and fanciful interpretations? Can we only trust the highly conservative, don’t-ask-any-questions teachings? Is there a better way? Many have offered solutions, and McLaren adds his voice with the idea of seeing Scripture in the light of not liberal or literal but literary.

Anyone with seminary training knows this view and its dominance in theological studies, but McLaren provides a way for the masses to see and understand. Not going as far as other popular theological teachers, like Marcus Borg who promotes the way of myth and metaphor over literal, Brian McLaren demonstrates the power of knowing the literary way of reading Scripture places the Bible where I belongs, a book that molds and shapes us through the power of story, literal or not.

Part III on The Missional Migration takes advantage of the popular but often misunderstood or misused buzz word of today’s pastoral leadership. The overarching idea is that many are weary of organized religion (which has been proven for over two decades of research) so no surprise there. The answer?

Missional movements that are organizing in nature not organized. There is a freedom in continually organizing and not being stuck to an organized and set system, especially in a post-postmodern worldview.

A concept that I found especially helpful was his primer on social movement theory. Social movement theory revolves around three concepts: communities, institutions, and movements. To over simplify for brevity, communities are the groups of individuals bound together because of a dependence on the same surrounding environment. Institutions spring up among a community to serve them for the safety and welfare of the gathered community. Yet, when institutions fail and are more harm than good, movements arise that challenge the institutions behavior and demand reform.

It doesn’t take a genius to see how social movement theory explains so much about the church as an institution for the communities welfare and why movements over centuries have risen up to challenge the church when more harm was done than good. Think how nice this sums up behaviors of those heroes in the Bible and beyond. Moses, David, Nehemiah, Jesus, Paul, Martin Luther, Dietrich Bonhoeffer, Martin Luther King Jr and so many more. Yet, as we celebrate these today, in their day they were seen as adversaries to the good and holy church, heretics all of them. So next time you cry heretic at a social movement leaders, be careful as that same person may be known as a hero of social reform among civic, religious, and educational institutions.

Overall, I give this book four stars because some of it is repeat, but there is enough new and unique to allow this book to stand on its own. Plus, those who may encounter McLaren for the first time will find a great and quick primer to his overall theological and missional thoughts. I honestly believe that his small dealing with social movement theory will create a greater rise and interest for Christian pastors and leaders and thus spur on soon coming books if they are not being written already.

I recommend this book to three types of people: seekers, disillusioned pastors, and movement shapers. All of these types of readers and thinkers are seeking books such as these to help them place language to the inner issues they struggle with and need answers and way forward. Seekers will find the discussion on God 5.0 a help when they have so many questions on the OT God and the NT Jesus. Disillusioned pastors will find tis advantageous as they know there must be a healthier way to do church, especially when reform is desperately needed in their community or context. Finally, movement shapers need this book as they often need more boundaries and, dare I say, meat to their activistic nature. We have all encountered passionate activists who could use a major boost of theological mooring.

If you are tired of the same old run of the mill Christian thought books, The Great Spiritual Migration may just put a smile on your face and keep you up late at night reading, thinking, questioning, and asking…is there a better way?