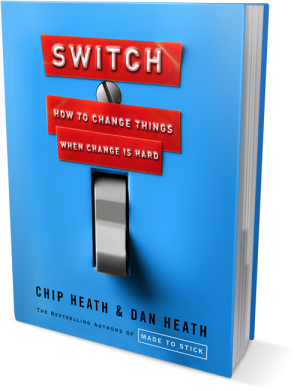 Based on the book SWITCH by Chip Heath and Dan Heath

Successful change has a common pattern. The pattern is summed up in three things being guided at once:

For example, when the elephant wins, we see these moments as:

The elephant is that side of us that wants a quick pay off (eating lots of ice cream) as opposed to the rider that looks at long term gain (being thin).

This does not mean the elephant is bad. We need emotions like:

The rider is a thinker and a planner.

The rider paints a picture of such magnitude, not simply on the final destination, but on how bad things are NOW and HERE and that THERE is the only possible outcome for a profitable and preferred future.

Nevertheless, the rider can start to see negative areas and roadblocks everywhere.

Ever have that problem? Time to change and all you see is the tough spots?

Again, we tend to focus on the negative, fixing what is broken instead of what is possible. We need to ask, “What is working and how to we do more of it?”

Here is where we need to be precise.

As stated before, know what the target goal is, the end game.

Know what the THERE (sandy beach and deep blue ocean) is that makes the HERE and NOW look like a garbage dump.

The best way to do this practically is to explain in non-vague terms, “What does a win look like?”

We need to learn the language that speaks to people’s emotions.

What is needed is motivation, which comes best from emotions, especially positive ones.

Create milestones that are actually within reach. (Ex: Smoking – don’t smoke for 24 hours instead of for one year.)

Obtainable goals make all the difference on achievement and morale.

Remind people of the successful change already made (small wins).

This create hope and build momentum!

Help people connect to with their identity.

Or even to connect with a new identity within the organization.

People always act in accordance with their identity.

Here it is critical to let people know that failure will happen, and that it is normal, and it’s okay. That way, when failure comes, and it will come, they won’t quit.

Quitting at the first sign of failure is demotivating and emotionally challenging.

First off, understand that we must make the journey easier. Create a downhill path before giving a solid push.
For example, Wal-Mart shapes paths all the time.

So here we have to change habits, and that has a ton to do with our current environment – the path in which our journey is headed.

This takes more work and planning up front but helps move faster later in the process.

Again, this makes it much easier to make decisions ahead of time, when you make them earlier in the process.

Plan up-front creates less confusion and you move faster. Plan late in the process and you may give up because of mass confusion, low morale, and early failure.

When a situation is ambiguous, we look to our co-workers for cues on how to behave.

Since change is often ambiguous, leading elephants through an unfamiliar paths can cause anxiety, so they will always follow the larger heard (which can be good or bad).

So publicize those who are doing the “right behaviors.”

Let everyone know where the herd (organization) is going, which can create momentum and excitement when done well.

Let the ones who are already on board and let them reinforce others, creating a synergy that will draw in the late adopters and those who are on the fence.

You may have heard the ancient proverb, “A long journey starts with a single step.” However, making the step does not guarantee you will finish the journey.

Again two things to be reminded:

Again, learn how to spot positive behaviors, since most people focus on the negative ones.

The good news is once change starts, if it is reinforced, it will develop more and more momentum, taking on a life of its own. This is the highest goal.

Change is not easy, but it’s at least possible.

What we known though, is that the best and lasting change, happens in a certain pattern.

Therefore, “people who change have clear direction, ample motivation, and a supportive environment. In other words, when change works; it is because the RIDER, the ELEPHANT, and the PATH are all aligned in support of the change… and you are able to make the SWITCH!”